As someone who has watched sundry attempts to combine music at the spoken word at poetry readings, and even gamely attempted himself to do it a couple of times (with fine personnel, but yet without in my judgment totally coalescing) I was staggered and stunned by the brilliance of the event I saw at the New School of Robert Pinsky reading his poetry with Vijay Iyer (on piano), Andrew Cyrille (on drums and Ben Allison (on bass); the musicians are all New School faculty members. Pinsky said at the beginning that the four should just be regarded as a quartet--with the spoken word as another instrument, like the singer in a band--and, astonishingly, this worked. Pinsky read his verse with an offbeat, syncopated, slightly ironic quality, very different from the straightforward, public, 'everyman' quality his regular readings are known for. I had not had such fun at a poetry event in ages, and several in the audience--including a distinguished elderly poet and some other veterans of literary readings--agreed. Pinsky's readings of "The want Bone"  and of "Street Music" from his "City Elegies" sequence--which made such an impression when I read it in the New Yorker some years ago--were particularly impressive, and that the latter--with its complicated web of references to Memphis (the Egyptian, not the Elvis one) , Nineveh, Ashurbanipal, and Babylon--became a dynamic, engaged thread in a jazz tune was revealing--it indicated the coexistence of erudition and joy, learning and spontaneity, that I had otherwise only seem in a really good academic lecture--which can have its own music. Pinsky's "happiness" (a word he once used in a book title) was evident, he seemed to have the Orphic qualities in him released, which does not have the danger of being too cathartic when one has been trained by Yvor Winters. I am less of a music critic than a poetry critic, but the piano struck me as essential, as a complementary melody anchored by the backbeat of bass and drum, Kudos to all involved; I dragged myself to it as I was still tired from Berlin, and got a last-minute seat in the bacl, but I am immeasurably glad I was privileged to see this extraordinary performance.
Posted by Unknown at 1:33 PM No comments:

I need not have had any reluctance--the trip was wonderful, both for the academic aspect--the symposium on Wednesday was invigorating and I felt on the same page which much of what the other people, both the two other principal speakers and the colleagues and graduate students in attendance had to say--and for the city itself. Berlin is not exactly the hip, edgy boomtown the media often present it as--the city is effectively broke, not so much from the aftermath of reunification or the current economic crisis but from earlier  bad real-estate speculation--but it is very congenial and highly affordable--half the cost of living of NYC, I would imagine. I went to sundry museums, including the Pergamon (a deeply moving experience, especially for the Near Eastern material), the Bode, the Altes Museum, several having to do with the relatively recent history of Berlin (the Wall, the German Democratic Republic, the Holocaust), as well as my personal favorite, the Dom or Cathedral--the Lutheran cathedral, naturally, where I ascended to the top of the cupola, a kind of ecclesiastical Empire State Building. And not only did I encounter wonderful collegiality at the Freie Universitat and have dinner with an old literary friend but I ran into a former graduate school colleague at the Alexanderplatz U-bahn station!

Here is a picture of me with the remnants of the Wall on Bernauerstrasse. 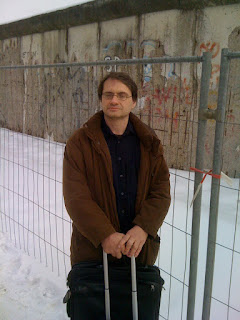 I don't really like traveling that much--I like being in the new place, but not the hassle of getting there, or of having os much work to do whenI get back. Equally, I am somewhat of a skeptic as to the euphoria surrounding globalization or transnationalism, a lot of which amounts to what Graham Huggan (following, I think, James Petras) called 'globaloney'. But here I am, about to go to Berlin to lecture on transnational dimensions of Australian literature. It will be a short trip, as it is the middle of the semester. and as it is I have had to ask colleagues to generously give of their time to guest-lecture and show movies to my Lang classes. But, of course, I'll enjoy it when I get there, the collegiality will be great and intellectually stimulating, the prospects for Australian studies in Europe it augurs are importantly polyvalent,  and they have put me up in a wonderful apartment in a hip' part of town, and, needless to say, it is a great opportunity, I have never been to Berlin before....

I am seeing Avatar today, I must be the last person in the world to have seen it, and I doubt any insights I might have will be particularly provocative! Nor did I have any such on the Super Bowl, as exciting a game as it was, except the Colts jinxed their season by resting their starters vs. the Jets...
Posted by Unknown at 11:18 AM No comments:

Links To Other Blogs