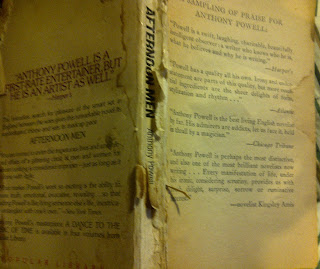 Here is a photo of my more than slightly foxed original 1970s paperback; I can say I have been reading this book for well over three decades. It is in very much a mass-market format; on the back pages, many other novelists are advertised (including my mother's romance-writing college classmate, Susan Hufford) but of these Anne Tyler is the only one that can be considered at all high-literary, the rest romance or gothic or adventure writers. This shows that the early Powell books were, in the 1970s, thought to have potential to sell well and to please a wide audience in the United States, though I am not sure on what basis (perhaps people who liked Upstairs, Downstairs or The Forsyte Saga on TV--but the bohemian London of Afternoon Men is a far cry, and not only temporally, from the core Edwardian milieu of both of these). I doubt this 1970s reprint of Afternoon Men sold more than moderately well at best. Again we are back to the most salient feature of early Powell--that it is not Galsworthy, and in fact eschews the Galsworthian social canvas even more than Dance did. This is perhaps why some readers of Powell's generation or the subsequent one, such as the late Sir Frank Kermode, preferred the prewar novels, in their austerity and irony, to Dance.
Posted by Unknown at 1:17 PM

When I read it I thought -as someone said of the Dance sequence- it has no spiritual dimension. It is journalistic: very funny in all its scenes and brilliant dialogue but with little explicit didactic aim. None of these characters have inner lives except insofar as they are needed to show their vacuousness. There is nobody to aspire to, save Verelst, the man of action who is very seldom present.

Links To Other Blogs